One building. Five floors. Five doors per floor. Twenty-five nightmares feeding the hunger lurking between the bricks and waiting beneath the boards.

A narcoleptic man in apartment 2A battles a vengeful past determined to rob him of everything as he runs from the barbaric disaster of a delusional love. A woman in 2B, reinventing herself to please a callous boyfriend, discovers the horrors that wait in the shadows of her self-renovation. The man in 2C, a teacher at the nearby Catholic girl’s school, collapses beneath the brutal consequences of his lecherous desires. An older woman in 2D, after decades dedicated to the church, is cornered at last by the grisly carnage beating at the hollow center of her faith. And a college student in 2E, hungry to escape an ignored life of invisible anonymity, finds herself captured between the pages of a ravenous book.

All thrown into their own private hell as every cruel choice, every drop of spilled blood, every silent, complicit moment of cowardice is remembered, resurrected and relived to feed the ancient evil that lives on Eidolon Avenue. 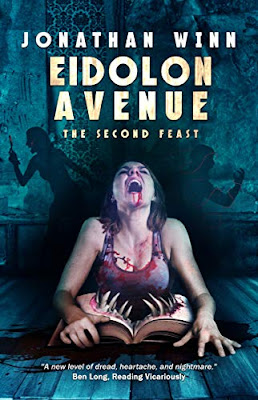 Jonathan Winn’s concept is full of potential: an apartment building that seems to cater to tenants with dark secrets or dark desires/impulses. An eerie presence lingers within the walls and halls, with the ability to manifest the hidden inclinations of its’ residents in horrific ways. Each volume of EIDOLON AVENUE contains five stories, focusing on a single floor of the five-story structure and what goes on behind each of the five apartment doors. Winn explores and exploits that concept in terrifying fashion. His descriptions and imagery throughout this collection drip with creativity.

There is a sub-genre within horror fiction described as “body horror”: no monsters or supernatural elements, just a violation of the human body whether physical or mental. In most cases, this sub-genre is the most frightening and disturbing. I haven’t read extensively in this category, but I believe EIDOLON AVENUE: THE SECOND FEAST deserves a seat at the head table. I’d recommend this to anyone curious and interested to explore what this sub-genre has to offer fans of horror fiction.

The best stories in this collection were also the most horrifying examples of body horror as well as the two tales that will linger and torment my thoughts for some time to come:

“Apartment 2B:Scrape” begins with an excellent foreshadowing of what will happen to the main character. A young girl searching for love and meaning removes old faded wallpaper from her apartment walls, prying at it with a knife and skinning it off in narrow strips. She’s in a relationship with an abusive pick-up boyfriend, who berates her for gaining weight. She aims to please him and begins by starving herself before taking things much too far.

“Apartment 2D: Torment” follows the troubled life of an old woman, who wants to be referred to as Sister Bramato, desperately trying to maintain a relationship with the Roman Catholic parish that expelled her because of a forbidden relationship when she was a young, beautiful woman and an apprentice nun. The story takes the Catholic concept of religious guilt to another level entirely. That relationship forced her into a horrific, dehumanizing deed, that returns to haunt her dreams and waking moments every time she closes the door of her apartment.

The remaining stories are equalling chilling:

In “Apartment 2A: Stumble”, a man troubled with sleep problems relives a nightmare from his past every waking moment despite the best efforts of a psychiatrist to help him confront the climatic moment he is trying to bury. There’s a twist to this tale that I did not see coming, which defines the possibilities of EIDOLON AVENUE in the best way.

A divorced and disgraced teacher at a Catholic girls school in “Apartment 2C: String, Cord, Tendril, Twine” learns that his lecherous inclinations have consequences.

The lonely girl in “Apartment 2E: Words Ingathering” is gifted with an unusual novel by an elderly sage-like bookseller and brings new meaning to being absorbed in your reading.

I received an advance reader copy of this in exchange for an honest review. I’m inclined to put this collection among the best of 2021. I’m not sure I’ll be reading another author’s collection this year with the same punch and impact, but it’s early. Although, I still expect EIDOLON AVENUE: THE SECOND FEAST to rank among the year’s best.