TALES FROM THE LAKE VOL 5: Great for Post-Halloween Reading 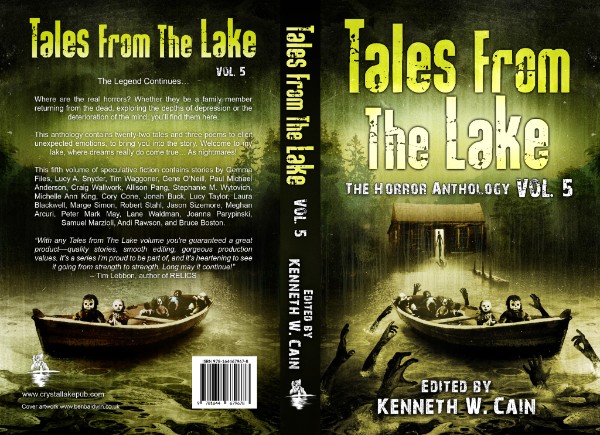 Over the years I’ve read enough anthologies, short story collections and fiction magazines to refine my expectations for what comprises a premium horror story. So when I declare that I thoroughly enjoyed two-thirds of the fiction in TALES FROM THE LAKE VOLUME 5 - - that says a lot about the high quality of the contents. Sixteen of the twenty-two stories and three poems in this volume met or exceeded my expectations. Seven of them I consider well above standards and worthy of re-reading. Of those seven, three are deserving of award nominations as this year wraps up. That’s enough to make this collection HIGHLY RECOMMENDED.

TALES FROM THE LAKE is becoming a very reliable source for new, quality horror fiction.  That’s a nice accomplishment, considering that each volume has a different editor. Each of these curators brings a different perspective and viewpoint to the selection of submissions that make the final cut.

In his introduction to this collection, editor Kenneth W. Cain shares that when reviewing the 715 submissions, he picked stories that best worked together “as parts of a whole” or just blew him away. He wanted “stories to gel, to accomplish something together.” As I read through this volume, I tired to identify the underlying theme.  What seems to come up the most in this diversity of styles and plots is a sense of loss:  loss of children, family, spouses, sanity, sleep, friends, identity, memory, innocence, and life itself. Not every story fits that template exactly, but maybe those few are the selections that blew Cain away.

These are the three stories that left a lasting impression on me, that I believe deserve some award nominations:

There are four stories that were also above expectations and deserve to be read again:

Stories that I found interesting but seemed to miss the mark or end without a satisfactory resolution were by Andy Rawson, Lucy A Snyder, Stephanie M. Wytovich, Laura Blackwell, Marge Simon, Meghan Arcuri and a different poem by Bruce Boston. Only one story seemed out of place in the anthology, “A Bathtub At The End Of The World, Or How Mr. Whittaker Achieved Knighthood” by Lane Waldman. It’s a whimsical fantasy (unless I misunderstood the premise) as opposed to the other stories in this volume, with a clever concept that spends too much time repeatedly demonstrating its cleverness.