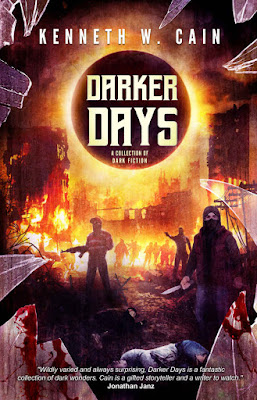 There’s a lot of interesting content in DARKER DAYS. What makes this twenty-six story collection memorable is the diversity of genres and the variety of themes.

Five stories in particular struck a chord with this particular reader. They made me pause after the last page or paragraph because they provoked contemplation of the human condition or a particular situation. Others required a reflective moment for appreciation.  These five are deserving of a second or third reading, and consideration at award time:

Eleven of the stories entertained and fully met my higher expectations.  They include the western-themed “A Ring For His Own” in which a town’s obsession for possessions reveals that all that glitters is not gold, and “Heirloom” where an antique camera compromises the photographer.

“Rust Colored Rain” is a tale of redemption with an alien creature observing a debilitating accident and passing judgement on a survivor.   “Prey” puts a spin on a hunter/prey episode told from the animal’s point of view.

“Outcasts: The Sick And Dying, Parts 1, 2, and 3 focus on three individuals with terminal and possibly contagious diseases quarantined to space, only to witness their world perish. The three react differently to events, and that provides the substance of these three very short vignettes, perhaps destined as components for a longer work.  “Outcasts 1: Henry Wentworth” is the best of the three. I had an indifferent reaction to the other two episodes, both too short to really make a poignant point.

“Puppet Strings” is an appropriately named story of dominance and manipulation about an arranged marriage during World War II which left me wondering if the main character was a real human as it ends in Twilight Zone fashion.  “Mantid” scored points for creativity, which helped me to overlook the unhappy ending.

“The Underside Of Time And Space” is a fascinating fantasy about doorways to other dimensions, doppelgängers, and manipulation.  During a lightning storm, an artist’s statue becomes infected by meteoric deposits which produce tormenting miniature monsters in “The Griffon.”  In “Adaptable”, a prisoner finds that his means of escape has unforeseen consequences.

“Presage,” is a disturbing and creative tale of a cloning experiment with spiritual implications which coincides with a lengthy war between the United States and Syria that concludes in a less than satisfactory, ambiguous ending.  “A Very Different Sort Of Apocalypse” is yet another zombie saga following the end-of-the-world by bombs and chemical warfare that differentiates itself with a most unlikely trio of survivors.

Cain reveals some welcome insights into his writing in both a confessional foreword and a detailed afterword explaining his mood and how it dictated where some of the stories began and evolved.  He has a remarkable gift for generating ideas from snippets of news and information and/or observation of conversations and situations. He also admits to an admiration for the Twilight Zone television series and five of these stories end in similar fashion.

Had DARKER DAYS  limited itself to the sixteen stories detailed above, it would have been very powerful.  Instead, the other ten stories only serve to weaken and dilute the impact of this collection.  Many of them have vague endings or just conclude too abruptly, failing to make their point or provide a satisfactory resolution.  In this case, less would have been more.  The collection would have benefited from an editor’s red pencil, perhaps launching itself into best of the year consideration had that occurred.  Still, sixteen out of twenty-six stories is a very satisfactory percentage of good reading and worth recommending.